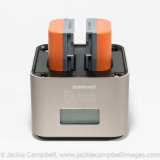 You can only make images if you have battery life for your camera! Sounds obvious...and it is! 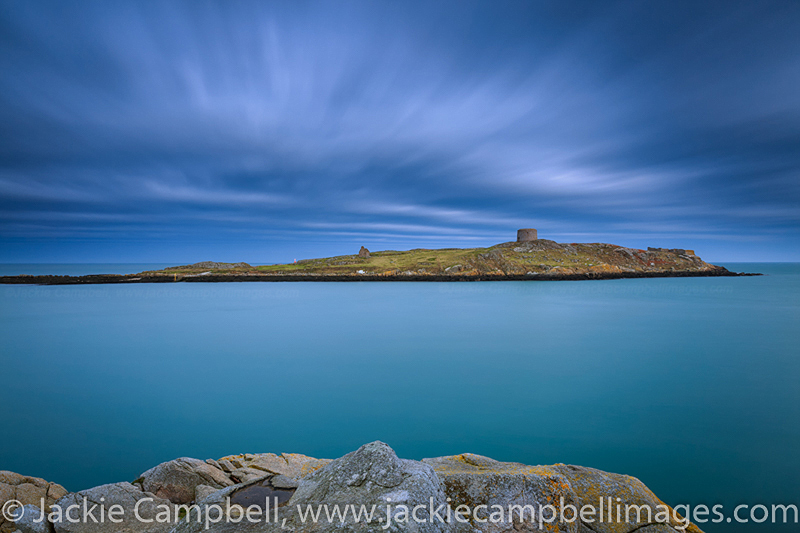 What may be less obvious is the fact that I’m Irish and to be honest the saying “to be sure, to be sure” really does apply to me? I’m the queen of back ups and hence was delighted when I recently had the chance to try out Hähnel’s ProCube dual battery charger along with a pair of their ultra high capacity extreme li-ion batteries for Canon DSLR’s.

To be honest, I jumped at the chance as I love the Hähnel products that I already have in my arsenal of accessories and because of this, expectations were set at a very high bar.

The parcel was greeted and opened with excitement.....Many thanks to the kind folks at Hähnel.

So for the unveiling; The ultra high capacity LI-ION batteries are bright orange so this makes them easy to spot in your camera bag.

The batteries performed as expected and although I didn't do any "scientific" testing in controlled environments, I didn't notice any difference in battery life when compared to Canon's own batteries. 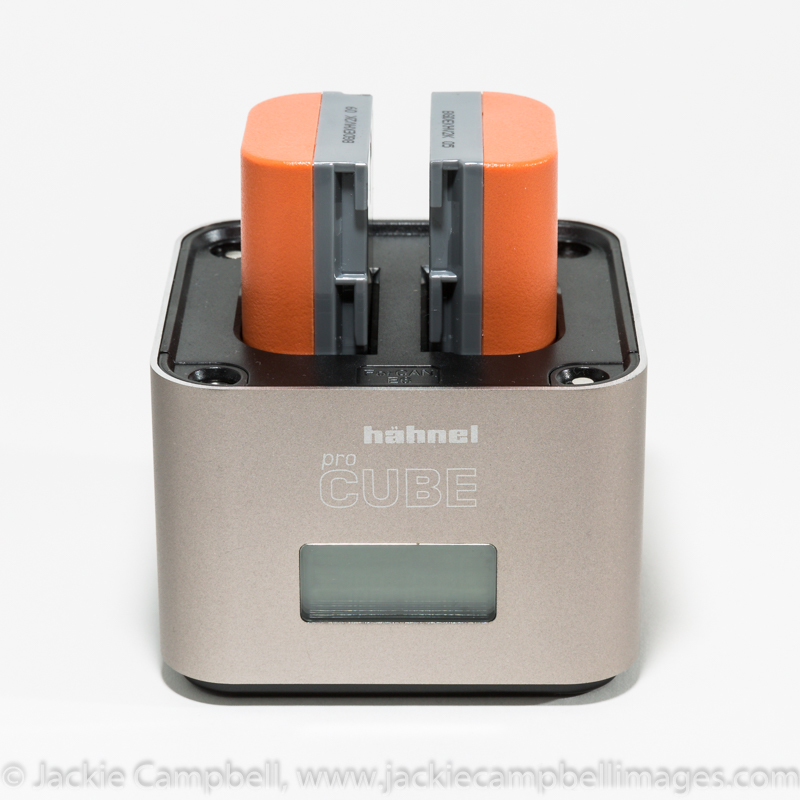 I have to be honest and say that for the ProCube twin charger, I would be doing it a great disservice to simply list the specs as per the Hähnel website. But for anyone that’s interested the link is here: (Hahnel website)

Below is a photo of what you get in the box. I use Canon cameras and so received the Canon version of this unit but it’s also available for Nikon, Sony/Olympus and for Fuji/Panasonic. The photo also shows the high capacity Li-Ion batteries that I received and these are sold separately to the ProCube unit. 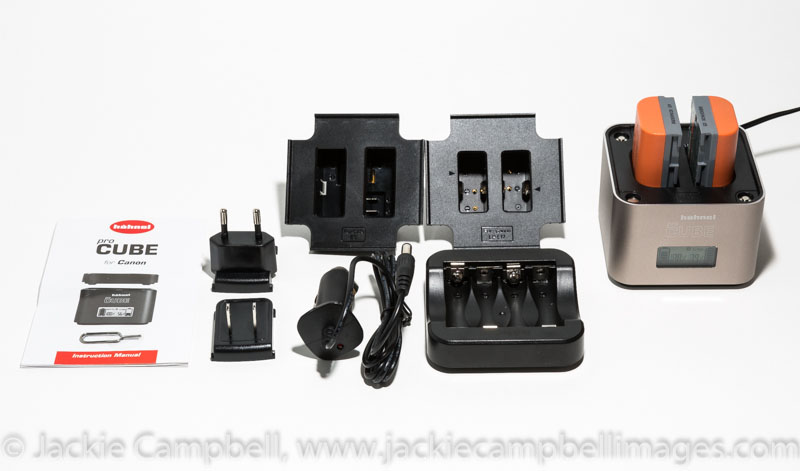 I think that it’s fair to say that Hähnel seem to have thought to everything in this package. You want to charge batteries at home. Tick ....comes with mains charger.

You’re travelling abroad and can’t find your socket adapter. Tick....fear not, it comes with interchangeable Irish/UK, Euro and US plugs. All bases covered.

You would like to be able to charge your batteries whilst in the car. Tick....comes with a 12v car lead that plugs into the car’s lighter socket.

You've left your mobile phone charger at home (haven't we all done that at some point!). Tick.....this unit has a usb port at the back that allows you to charge your mobile or any device that can be charged via a usb connection.

You can charge either one or two batteries simultaneously and it even has an LCD panel on the front that tells you the current status of both batteries independently.

The Canon version comes with the dual plate for charging 2x LP-E6 battery (main Canon DSLR battery) but also included in the box are two other plates for charging the LP-E8 and the LP-E17 batteries, so these can be swapped out if you also need to charge these batteries.

Charging times for a single LP-E6 is aprox 2hrs and about 3hrs if you're charging two at the same time (as per Hahnel guidelines- although I found that in practice they charged in shorter times; possibly because the batteries were never completely drained before charging.)

A really nifty additional benefit is the ability to charge four AA batteries simply by adding a separate tray that’s also included in the box. This means that those of us that travel with Speedlites or small torches etc can also charge batteries for these on the one device.

I can’t remember ever being so excited about a charger!

I had a small issue with the first Pro Cube charger that was sent out to me and when I contacted Hahnel, their immediate response was to send a replacement one out to me well before arranging for collection of the other one.

In an ideal world, nothing that we buy would ever go faulty. However, we live in the real world here guys and that simply doesn’t happen. In my opinion the true measure of a company is how they react when one of their products shows a fault, and not when things are going well. I have to be honest here and say “seriously top marks” to Hahnel’s response.

And that’s really all that any photographer wants; the ability to buy an accessory and know that you can depend on it to deliver what it claims to be able to deliver and that the company behind the product is reliable and dependable.

I should also say that the replacement Pro Cube performed flawlessly, and I was delighted with the flexibility that this unit allowed me. 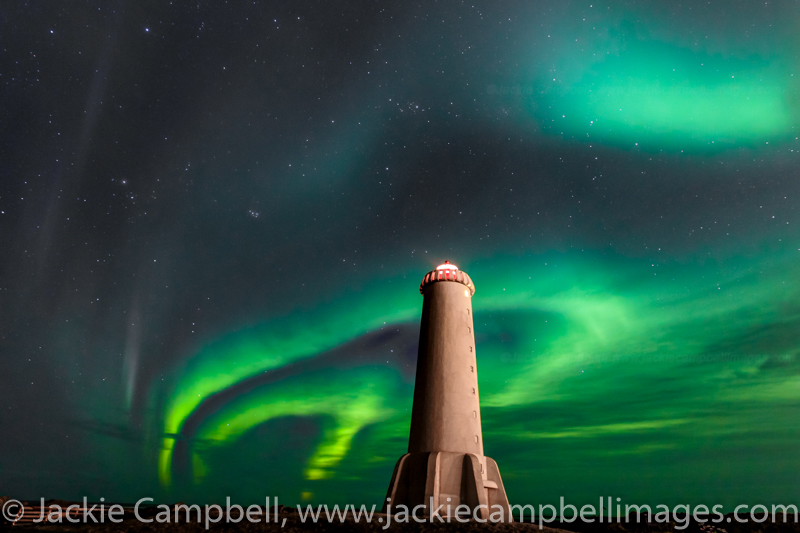 My expectations were set quite high and were met by these products. In fact I had to think long and hard to come up with any way that this product could possibly be improved upon; The only thing that I could think of was that it would be great if it could also charge AAA batteries. My suggestion on how this could be achieved could be either via an additional tray being included in the box for AAA batteries or by adapting the existing AA tray to be able to take both sizes. Then it really would cover everything! Don't get me wrong this is still an amazing product and to be honest the AAA batteries that I use are mainly for little torches so not strictly speaking a camera accessory.

I’ve lost count of the number of occasions where I’ve met photographers out for a day’s shooting and frantically asking around to see if anyone has a spare battery or a charger that they can use. I would suggest that they take a look at these products....they may save a shoot.

Note/Disclaimer: This review was written based on the use of products sent to me by Hahnel.. All reviews are based on my own personal experience. Whilst every effort is made to give accurate information, I cannot be held responsible for any inaccuracies and would ask that you do your own independent research before making any purchasing decision. Unless otherwise noted, I (Jackie Campbell, Jackie Campbell Images) am the legal copyright owner of all content, in all formats- written and graphic, on this website and it may not be used, reprinted, modified in any way or published without my written consent.
Next
Previous